..in the countryside of hills of Savigno

Savigno (location of the City of Valsamoggia), 30 kilometers from Bologna, is the capital of a

vast territory west Bolognese Apennine. It 'a place that offers the visitor a

harmonious panorama of hills, valleys, woods and streams: a rich territory of trails

suitable for hiking and cycling, but also historical and cultural excursions.

The territory of this valley is in fact a continuous surprise, with its churches, oratories, tower-houses (fortified houses built around the '400) and the old water mills.

Savigno is a must for lovers of good food and quality products.

With its many tartufini and their search dogs from the faithful, it is considered the "Regional Truffle Capital Bianco dei Colli Bolognesi Precious", and is included in the national circuit "Truffle City". There are numerous restaurants offering the precious tuber in its myriad culinary versions and shops that sell it, but the real point of valuation in the first three weekends of November, on the occasion of the "White Truffle National Festival of Savigno and prized Bolognesi 'necks.

The local products also have an extraordinary showcase in the "Market of the good things" (every second Sunday of the month from March to December), which allows the meeting between agricultural producers and consumers of the territory, and that takes place in conjunction with the " ancient "and the old market. 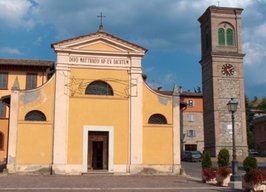 - Shrine of Our Lady of the thorn ( San Giorgio Samoggia )

- Sanctuary of the Blessed Virgin of Martina Cross ( Rodiano )

- Shrine of Our Lady of Villa Samoggia

Let the cars you follow for about 4 and a half kilometers away Gardellina, road without asphalt and without traffic you get into the middle of a nature almost intact, between meadows and oak woods. At the junction with Via Whiting, turn right and after about a kilometer you come to the cross of Pradole, monument to the fallen of World War II.

Bortolani: for a distance of about 2 km along the provincial road 69 before you introduce us in the way of Predosa, it's all downhill for about 2 km, leading to San Prospero, hilly town with the ancient church. The village has a history of great interest and reached the utmost importance under the guidance of the Da Cuzzano. At that time the town hall was in the hamlet of San Prospero and the market was held in what is now the capital city Savigno. San Prospero is still called "Savigno di Sopra".

Continuing our journey along the path CAI 201, a steep descent for about two kilometers, you will reach Ponte Mario again.

From the square, followed by a short stretch of Via Sant'Apollinare, until you cross via Bolognina from where we will follow the "path of the badlands." This street ends in a long Cavedagna which you follow until you reach a dirt road, because of the Badlands, then follow the instructions of the path CAI 207.

It then leaves the path for a short stretch of Via Monte Mauro, continuing until the Maiola church. Once back in San Benedetto it is then re-embarks on the path CAI 207, passing attravaerso wooded tract to check in Tiola (432 meters s.l.m.), ancient medieval village which boasts a beautiful fifteenth century church, dedicated to St. Michael the Archangel.

Resumed the path you follow via Puntiglia, dirt and downhill. Junction with the Zocca continue right along the path CAI 201, which goes up to Montalogno, leads in the locality Sant'Agostino.

At this point follow the asphalt road to follow up to Mercatello, then the Sant'Apollinare church, built in the center of a plane striking.

From here go up to Castelletto and returns to the starting point.

It starts with a visit to the medieval village, situated on a panoramic hill. Of ancient origins, the 800 gave asylum to Charlemagne, was feud of Matilda of Canossa and contested between the Guelph Ghibelline Modena and Bologna. It became the possession of Bologna in 1228 was strengthened and surrounded by walls. Ancient form can amirare the medieval entrance, the tower of 1523 and the castle signorile.Il palace was then adapted to aristocratic residence around the '500 and remained the property of Boccadiferro up to 800.

Within the walls there are medieval houses and the thirteenth-century municipal building, now headquarters of the Ecomuseum of the hill and Wine.

Leaving the village follow via Benzone until it intersects Via Bottazzone that takes us places Cuculla.

Don a downhill here be at Cantarone. Following the road to Vignola, turn left and after about 300 meters right into Via Cassola, following the path CAI 201.

After a short descent we pass a poccolo river and climb to Cassolano. Past the small village we turn left on Via San Michele and seguento even the CAI 201 ends the ring in Castello di Serravalle.